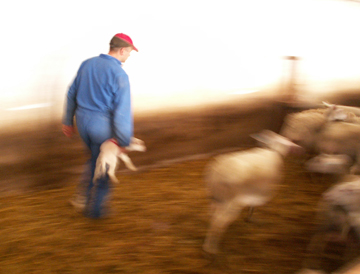 My husband’s new, blue overalls were already plastered when I arrived in the sheep barn this afternoon. He had placed the lamb he was holding on the ground and was waiting until its tail was no longer horizontal, trying to avoid adding another substance to the blood and iodine that covered his legs. Tail lowered, he picked it back up again and examined it. “Female” he said, spraying a letter on its back in red.

I picked up the little notebook and wrote down the number of the sheep and the letter of the lamb. Each lamb gets the same treatment – the umbilical cord is shortened with what look suspiciously like my old scissors and then it is disinfected with a good douse of iodine. Next comes a shot of vitamins in the leg. I’m allowed to fill up the syringe this year. My husband must have forgotten that I poked the needle in my finger last time and then spent two weeks worrying about what sheep related disease I was going to die of.

The sheep and lamb(s) are then sprayed with the same letter – blue for those sheep who have just one lamb and red for those who have had twins. Finally in the notebook will go any comments relating to the sheep, such as “milk on only one side”.

Every now and again, a ewe will get a smart new necklace of blue string – usually when they are old or have health problems. These sheep will be taken away sometime after lambing and will be turned into lipstick. Or so I am told, although this could be just a ploy on the part of my husband to encourage a reduction in my cosmetics expenditure.

This entry was posted in Farming and tagged lambing, lambs, sheep. Bookmark the permalink.

8 Responses to Lambs, overalls and lipstick