The apple orchard that almost was

“They don’t want them” he said as he came into the kitchen, worry flickering across his face. “They’re only interested in the good ones.” I looked at him uncertainly, the knife in my hand hovering above a tomato. This was bad news.

With only five days to go before picking, we still had no buyer for half of our crop of Golden Delicious. The small hail storm that had hit the orchard at the end of June had left many of them slightly pockmarked. These apples could no longer be sold as Class I produce and nobody wanted them. We were also faced with the dilemma of a bumper crop. For the first time ever, we had the logistics of picking and selling 20 tonnes of extra apples. Good apples mixed in with bad.

My husband sat down, delved around in the drawer for the calculator and started tapping on it furiously. Of course, we still had our contact in Provence. He would probably take them, but we were unsure whether we would be able to cover the costs of renting extra bins, then grading and transporting damaged apples such a long way.

After a minute or two he looked up from his figures, obviously unenlightened. Part of the problem was that we had no idea of the price that the apples would fetch. We would only know how well they had sold in January once we collected the cheque. It was like trying to run a business backwards. You sold the product, and then once you received payment you could work out whether or not it was worth making it in the first place. If we made a mistake now, or if the apples sold badly, then profits would be zero. Or worse.

Part of the orchard was protected from hail by netting. The apples there looked beautiful and would go to Provence – the only decision that we would need to make for these would concern packaging. The others were a mixed bunch. Some were perfect, some, less so. They needed to be graded and sorted – the good ones would be sold as Class I, the others would be turned into juice and compote. We didn’t have the finances to do this ourselves. We needed a wholesaler.

There was still one company we hadn’t tried calling. Buyers we had always steered clear from in the past out of principle, and to whom we had always sworn we would never sell. They had now become our last chance. As my husband picked up the phone and started to dial, I knew that we had reached our lowest level of desperation. 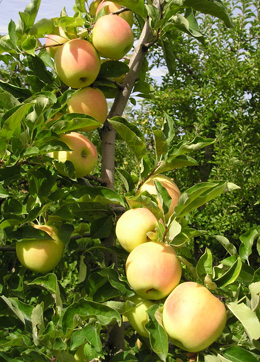 This entry was posted in Farming, The Apple Empire. Bookmark the permalink.

8 Responses to The apple orchard that almost was