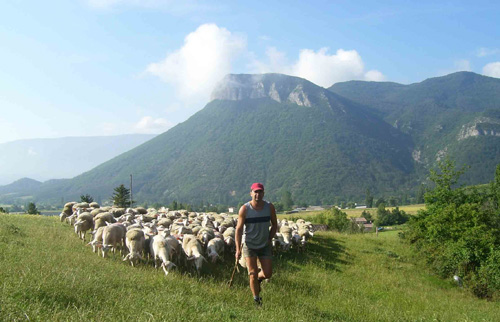 I stepped back and felt a whip crack across the back of my legs. I yelped and hurled myself forward as much in surprise as from pain.

The electric fence looked innocuous and I cursed at having forgotten its presence. Erected to keep wild boar out of the barley, it was also efficient against absent-minded two-legged creatures. I looked down at my calves, which were still smarting, glad that I hadn’t been tempted to put shorts on. My trousers were soaked to the knees from the dew and I imagined that I was excellent conductive matter.

In a sudden bout of early morning enthusiasm I had walked up to the higher fields with my husband; the sheep following a few paces behind us, to pastures where they would spend the morning grazing. I had slipped and slithered in the mud trying to keep up as he strode ahead, puffing from the exertion of the climb; aware that if I tripped I would probably be trodden into the ground by a thousand feet.

Reaching the top on all fours, I gripped a tree root thankfully and hauled myself up into the field, moving quickly out of the way of the stampede of sheep as they ran towards the high grass. I turned and looked across the valley. The mountains opposite, an aesthetic collision of Alps and Provence, had been washed to technicolor brilliance by the storm of the previous evening. Behind me poppies grew wild. I wanted a photo and had seen the perfect specimen the other side of the electric fence…

I staggered over to my husband, laying on the agony, hoping for a bit of “kiss-it-better” treatment.  He was perched on a rock, keeping an expert eye on the flock.

“I’ve just been electrocuted” I announced. He looked round in surprise “Was it you? I thought it was the dog” he said, in a tone that suggested that the dog probably would have got more sympathy. “It’s never happened to me before” I continued with a pained expression. “Well”, he said trying to look compassionate and failing miserably “you won’t be able to say that any more will you?”

This entry was posted in Farming. Bookmark the permalink.

7 Responses to To pastures new